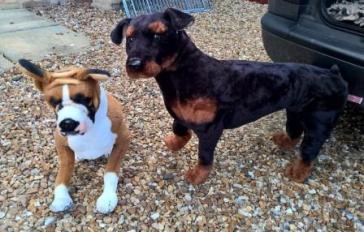 The answer seems to be ‘Yes’.

I started thinking about this again yesterday when the girl who served me at Pets at Home told me she had recently done her thesis at Lincoln University on that very subject. She was kindly lifting a heavy bag of dog food into my car when she saw my two stuffed stooge dogs.

There is a recent study mentioned in the Applied Animal Behaviour Science: ‘Consistency of shelter dogs’ behavior toward a fake versus real stimulus dog during a behavior evaluation’.

Here I quote the highlights:

Patricia McConnell writes about this question asked by a team of researchers in Massachusetts, ‘who did a study comparing the responses of 45 shelter dogs to a live dog and a fake, plush, stuffed dog. The real dogs were presented with a neutered, male American Staffordshire mix and a similarly sized, fake dog who was the same size as the real dog but is described as “having the appearance of a pointer breed dog”. Individual behaviors were recorded as occurring or not (approach, sniff, bark, growl, back away, etc.) and were also later lumped into three categories: “aggressive, fearful or friendly/playful”

The stillness of a stuffed dog in itself could spook many a dog to actually be worse with a fake dog than a real one. Just because a dog knows that it’s not ‘real’ in a sense he understands or not actually in the room, he can still be scared or angry and react accordingly. Many dogs bark at other dogs on TV and at their own reflections. 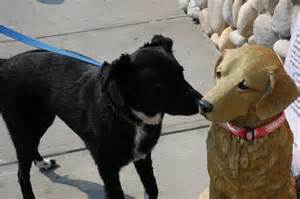 To quote McConnell again: ‘I’ve always speculated that fake dogs, being stiff and motionless by definition, are more likely to elicit fear or aggression than a live dog would. After all, real dogs usually respond to another with some kind of action, whether it is looking away, flattening its ears, or lunging forward and barking. Nothing makes me more on guard than a dog who goes stiff and motionless, so it makes sense that until a dog realizes that the stuffed one is fake, it would be more reactive than usual. Note that the fearful reactions to the fake dog were over twice as common as to the real one.’

In her article McConnell includes some great photos of her own dogs – though dogs already fine with other dogs – encountering the fake dog for the first time.

So how fair or accurate is it to test shelter dogs for reactivity by using fake dogs?

The study has been concerning the accuracy of response to fake stooge dogs being used to assess a dog’s behaviour towards other dogs, not their value than as a training tool. It would be good to think that the results could influence assessors’ use of fake dogs for evaluation.

I myself only use a fake dog for distance work, to help owners with the technique of dealing with their dog-reactive dog at threshold. Even though fake, it still has to be thought out. I made a big mistake at the beginning by placing my fake stooge in the person’s drive. The dog went mental believing his territory had been entered by the enemy!

I found an interesting video. Ignore the handler (I’m not quite sure what she is actually trying to achieve) and watch the dog – particularly the marking at the end!

Here is  a video of a gorgeous and gentle Pit Bull very closely engaged with the fake, who still seems to be fooled – or does he know it’s not real and is just playing anyway?