A recent exchange on Facebook got me thinking. It was in response to this picture.

This was how the posts started:

First response: ‘Total rubbish, if a dog is intelligent enough to know what you ask of it, it has the brain power to occasionally think I don’t want to do this. Then it is being STUBBORN until you persuade it otherwise’.

Second response: ‘I disagree. To be stubborn, a dog would need to show determination not to do something despite a high enough reward. If a dog doesn’t want to do something, it’s because it hasn’t been motivated to do it or, as is often the case it’s fearful /uncomfortable doing it. I have never met a stubborn dog!’

Me: ‘I have never met a stubborn dog either. Some need more motivation than others that’s for sure. Humans call dogs stubborn because they have themselves failed to communicate properly.’

No thank you. I can’t do cartwheels at my age even if I could once. Does refusing make me stubborn?

“Theo, step into the lion enclosure.”

No way. It’s too dangerous. I’m too scared. Does refusing make me stubborn?

“Theo, go and sit on the third stair and count to a hundred.”

Why? What’s in it for me? Pointless. Does refusing make me stubborn?

If I knew you were going to pay me in money or chocolates for sitting on the third stair and counting to a hundred – what is to me a totally pointless activity – then I might do it.

If someone tells me to do something I deem pointless, dangerous or impossible and I refuse, am I being stubborn? 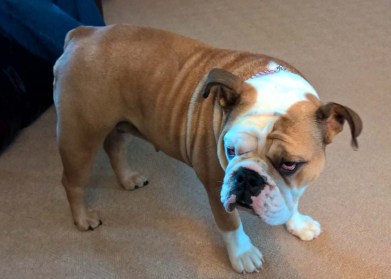 Interesting that one of the words is ‘dogged’. Apparently the origin of the word is Old English docga, rare word for a powerful breed of canine.

Basically, what is implied when people accuse a dog of being stubborn is ‘doggedly and persistently refusing to do something for no other reason than it wants to to be awkward.’

Sadly, a person believing in dominance may try to break the ‘stubborn’ dog by using force and punishment. He or she must ‘win’. In this case the dog complies in order to avoid something, so again the dog has a reason for compliance.

‘Stubborn’ implies refusal for no reason other than a premeditated desire to be awkward for its own sake.

Being awkward for it’s own sake – a human thing maybe.  We have brains capable of being a lot more calculating.

If we feel our dog is being stubborn (and I have met a lot of dogs that look like this to their owners – refusing to walk, refusing to come when called, toileting indoors and so on), then the humans’ communication skills are lacking. Possibly ‘refusing’ brings more reward than ‘obeying’ in terms of attention and fun!

This brings us on to another whole thing – whether a dog should be allowed choices.

Calling a dog stubborn seems to me more of a reflection on the person, not the dog. The person is a dictator believing dogs are minions that should give blind obedience.

It makes me think of words from a poem I remember learning all those years ago as a child, about young men riding blindly to their death – The Charge of the Light Brigade by Tennyson: