I have just read a really interesting and comprehensive blog by Karen B. London in TheBark.com: A Guide to Dog to Dog Greetings

To quote London: ‘Despite some variations, the basics tend to be the same. Dogs move toward each other in a calm and relaxed way, often approaching from the side or along an arc rather than head-on. Sniffing is a huge part of the process, and dogs may take an interest in any area with glands, pheromones or other scents. They might touch noses first, then move on to sniff the anogenital region, or they might start their investigation at the back end of the other dog.’

This paragraph particularly caught my eye: ‘According to John Bradshaw, PhD, males typically sniff the area under the tail right away, while most females initially go for the head. (You may be able to sex the dogs who greet your dog based on this behavior alone).’

Is this apply to all greetings, or meetings between less familiar or new dogs?

Is the behaviour the same when they encounter dogs of the same gender as themselves as when they greet those of the opposite sex?

Are dog crotch-sniffers of humans more likely to be male?

I’m now watching my own dogs, two boys and two girls, to see what happens between very familiar dogs.

This inevitably brings me on to Pickle.

My Cocker Spaniel is a bum-sniffer! Anyone knowing Pickle would expect no different. Most particularly the bums of my two female dogs.

I can accurately predict what he will do straight afterwards, too.

He will then inevitably either lift his leg as near to her as possible, on her if he can; usually nearby because she moves. (He even went through a thankfully short phase of doing this indoors too – Oh Pickle!).

PS. For those who may ask the question, yes, Pickle was castrated years ago – he’s eleven now. 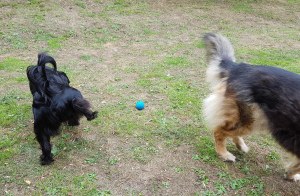 I am a dog Behaviourist C.C.B (Certified Canine Behaviourist) INTODogs). I have helped over 3000 dog owners over eighteen years. In addition to online consultations all over the world, I cover Beds, Herts, Cambs and Bucks for home visits. A 'Victoria Stilwell' Positively Dog Trainer (VSPDT) and a full member of the IMDT. Graduate ISCP, International School for Canine Practitioners. My main site: www.dogidog.co.uk
View all posts by Theo Stewart →
This entry was posted in behaviour and tagged dog to dog greeting, lifting leg, marking, sniffing dog then marking, urinating on female dog, where dogs sniff. Bookmark the permalink.