Do All Dogs Want to be Wiped with Human Scent? 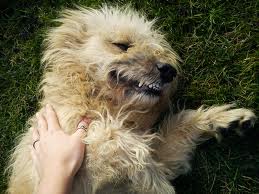 We know that many dogs don’t much like being touched people they don’t know – particularly down their backs. Many will back away or just put up with it.

I’ve been trying to ‘get inside a dog’s skin’ to imagine what he thinks I am up to when I stroke him.

One thing is certain. Dogs can’t stroke one another. They will lick one another though.

If the dog thinks I am doing the human equivalent of licking, then what could I be communicating? Am I washing him? Am I seeking his attention? Am I a bit unstable and trying to relieve my stress. Am I a bit obsessive?

Would we necessarily want another person touching us for these reasons?

I did read somewhere that where hierarchy is concerned the highest member is licked but doesn’t himself do much licking. This is certainly the case with my own four dogs but it could be coincidental or due to something else. If this however is true, maybe the dog doesn’t want homage or deference – or maybe he only accepts it from selected people. 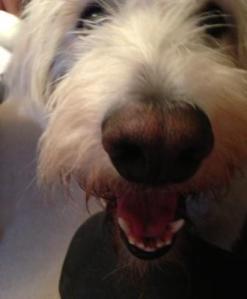 I am more inclined to believe that he thinks I’m trying to cover him with my scent.

Cats certainly rub against surfaces and people to distribute their own scent and I believe dogs do this also.

Our dog may well like to roll in smelly things to cover himself with scents of his choice, but does he want my scent (or that of other dogs I have been touching, household products, scent from other humans who may have touched the same surface as myself, food and so on) forcibly wiped all over him? He may not like these smells any more than we like the smell of the fox poo he has rolled in.

Very likely there are scents of countless things transferred from human hands to dogs. We know just how keen their sense of smell is and how they can smell the story of the very smallest trace of something.

As the canine sense of smell at least hundreds of times and perhaps more than a million times more acute than ours, we can’t begin to imagine what the dog may be receiving from a simple wipe of our hand over his body.

Unable to take a dip in a river, he will now have no choice but to carry that smell about on him when he meets other dogs. They, too, will then read all about the people who have stroked him and the things they have recently touched – possibly not so good for his doggy street-cred as fox poo!

Is it just possible, then, that one reason some dogs don’t like being touched is for no other reason than because they don’t want to be covered with human scent?

They may simply not like to smell of us!

(All this is total conjecture and not backed up by fact that I know of, but I find it food for thought).

A colleague has just posted that it’s made her think also and says ‘How about mounting? Perhaps some dogs think you’re lining up to mount? Many dogs start off mounting by placing their chin or paw on the back? I hadn’t really given it much thought until now….I just accepted most dogs didn’t like being stroked down their back by some people. Thanks for making me think about it’.