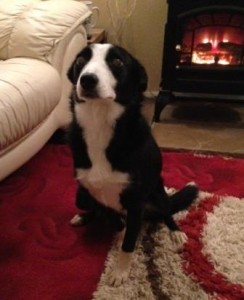 Border Collie fixating on the wall

The other day, whilst waiting in the queue at Pets at Home, I listened as a man asked if he could buy a laser light for his dog to chase – listed on their website as a ‘laser chaser’. I’m sure the man had no idea of the potential danger of what he was looking for to his dog’s state of mind.

Sara Reusche in her Paws Abilities site writes a cautionary blog on the dangers of dogs playing with laser lights and tells the story of a little ‘cavachon’ whose obsessive behaviour had led to injury. He ‘was obsessed with lights, and would do anything to try to catch one… including harming himself’. He had an oozing, open wound on his muzzle and nose.

This dog’s obsession started by chasing a laser light. His previous owners had used the light to exercise him as an alternative to taking him out for walks and he chased after it delightedly, racing throughout the house. ‘They sent him up and down stairs after the elusive light, onto the sofa and under the table, around and around until he was tired out.’

The dog soon began to stalk shadows and any light patterns.  He no longer sniffed when out on walks, but instead searched constantly for lights to stalk. The article goes on to describe just how distressing and devastating this excessive behaviour had become, until after five years his first owners gave up on him and put him up for adoption.

Victoria Stilwell gives some basic tips, summing up with ‘Never exercise a puppy or dog with a laser light. Many dogs that are exercised this way become fixated on moving light which then transfers onto natural flickers, shadows and reflections’.

I have been to many dogs that fixated either over lights, shadows or imaginary flies. One little dog with OCD behaviours became so overwhelmed that he would chase his tail until he caught it, and then he chewed bits off the end until they had to dock it.

Above is the picture of a dog I helped, story here, that spent most of her life simply staring at the wall, waiting for a light.

Another thing that people unwittingly cause their dog to obsess over is balls – to the extent that all the dog thinks about from the moment he wakes in the morning until everyone has gone to bed is getting someone to throw a ball for him.

This is to do with excess, not sensible, controlled play which has a start and an end.

Constant ball play when out

Here is the story of just such dog I went to, a Jack Russell, and another of a ball-obsessed English Bull Terrier. I see people repeatedly throwing a ball to their dog while they eat their tea or watch TV. Walks are all about chasing balls, not about sniffing, scenting and maybe playing with other dogs.

Apart from deliberately using a laser, it can seem amusing when the glass of a wristwatch reflects light onto a wall and the dog chases it. Anything used for chasing that is repeated too often has the potential of becoming a fixation to a dog, particularly an active breed that is either under-stimulated, under (or over) exercised, and whose humans find that a demanding dog is ‘off their backs’ whilst focussing on chasing.