Racing Greyhounds – how can this still be happening in 2014? 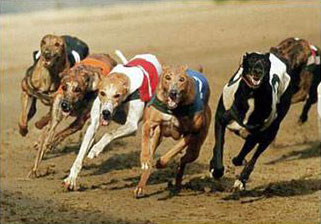 “Greyhound racing is a self-regulating gambling business that depends on the uncontrolled breeding and unaccountable disappearance of thousands of dogs every year. That is a situation that is unacceptable and indefensible,”  says actress Annette Crosbie OBE

The Greyhound racing industry is self-governed by the Greyhound Board of Great Britain (GBGB). Current legislation covers dogs at the tracks but when the dogs are off the track there are no legislations!

C.A.G.E.D. North West: When there is concern about welfare of greyhounds registered to race and the RSPCA are notified by such as a member of public, the RSPCA will usually pass the duty onto the GBGB. We compare a self regulated industry as similar to a brewery running alcoholics anonymous. It’s just not practical and allows them to be a law onto themselves.

They ask the question: Is greyhound racing wrong? That’s not hard to answer. When they are injured, too old or simply not winning, many are killed, and not by humane injection like our pets. Annette Crosbie says that according to DEFRA, killing dogs with a bolt gun is not illegal. That’s unbelievable in modern Britain.

PETA, People for the Ethical Treatment of Animals, says ‘The greyhound racing industry treats dogs like running machines. For the few minutes that a dog spends on a track during a race, he or she will spend many hours confined to a cramped cage or kennel. Thousands of greyhounds die each year….. ‘

David McDowell a former acting chief veterinary adviser for the RSPCA says “All aspects of welfare within the greyhound industry, from breeding and transportation to handling, racing and retirement, and final euthanasia must be comprehensively improved…..The RSPCA is calling for the governments of England and Wales to apply external regulation to the greyhound industry as a matter of urgency.”

I have merely touched the surface of the horrors suffered by some racing Greyhounds and ex-racers.

Why hasn’t regulation happened years ago? Could it be that about £70 million a year that is generated in tax by the Greyhound Racing industry?

On a much lighter note, here is the story of a lucky ex-racing Greyhound, Charlie, that I went to a while ago.